The role of process in design has become very important in the past 10 years but did you know that process importance can be traced back to Abstract Expressionism and Color Field painters? 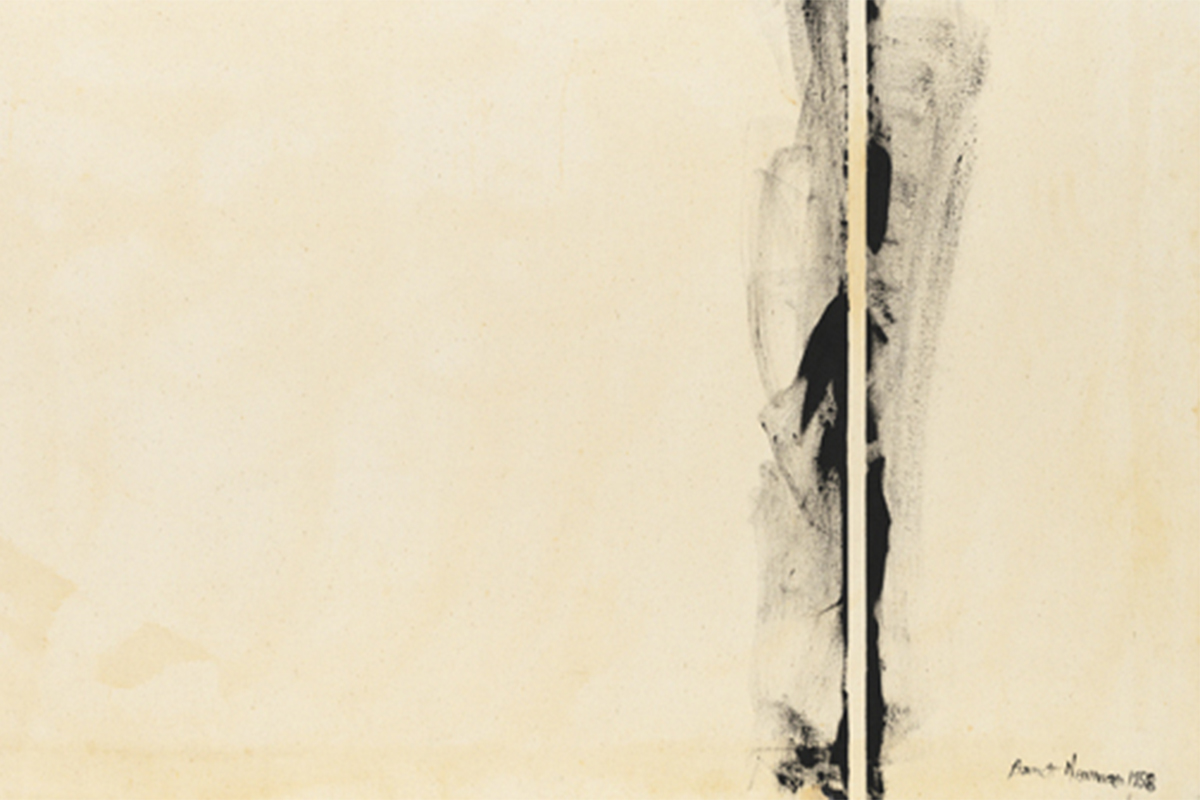 The elevated role of process is extraordinary in that it allows for the rise of environmental, conceptional and experience art. All these art forms flourish through an emphasis on the journey of making art as well as the experience of the final piece.

I’ve selected Barnett Newman’s First Station (1958) to discuss process. First Station (6.5’ X 5’) is a reference to the Stations of the Cross and is one of a series of 14 paintings. The painting has a background of a rich white parchment color with a bold black stripe bleeding of the left edge from top to bottom of the canvas. Some areas are unpainted raw canvas. On the right is a stripe that Newman called a zip. The zip is a fairly clean line on the inside but rough painterly strokes on the outside. The zips were made by tape laid on the canvas then vigorously painted strokes over the tape. The tape would then be removed to uncover the clean inside lines.

Newman’s process differentiated from the New York School artists in that he approached his art intellectually prior to putting brush to canvas. He believed that after WW II the typical subjects of art must be abandoned and that America’s lack of myth meant that a new world of pure organized shapes needed to be established. He began by writing about art until he discovered a technique that he felt would fulfill his objective of capturing the sublime in a universal experience. Interested in forms that “by their abstract nature carry some abstract intellectual content”, Newman found his form of visual expression when he remove elements from his paintings leaving large blocks of color separated by the zips.

He felt the “zip” further removed compositional elements and issues enabling the viewer to focus on the deeper meaning of the work. He felt this work was obtained through the process of direct intuition leading to the sublime.

Newman’s process was a combination of intellectual study, working out ideas prior to canvas, automatism and free association. Instead of being introspective, he brought cosmic and religious themes to his work along with the study of science, botany and ornithology (study of birds). At one point Newman abandoned traditional sketching for scrapes of paper outlining mathematical proportions such as 2:1:3. He named his pieces titles that gave the viewers clues to his state of mind when painting. Newman’s intent was not to physically represent the subject but instead wanted the viewer to feel the universal emotions associated with the Stations of the Cross. This differed from other artists of the time who were not interested in the viewer’s interpretation of the piece.

There is a balance in Newman’s process— intellect to emotion— that corresponds with his search for balance between the formal and the abstract.

So next time you are stressing process to your clients or possibly students — thank those who came before you!